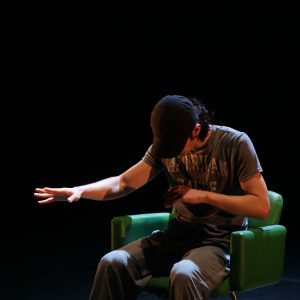 The night will include [SAL] of Kim, Jin A and A FIRST MEET of Lee, In Soo. Both shows are with a single ticket and their total duration is 60 minutes. There will be an intermission between them but guests are not encouraged to leave their seats.

Everything in my life is started by ‘me’. When I concede and admit me as it is. That is the first day of valuable life.

In A FIRST MEET an artist meets himself for the first time once again. This may seem easy, but is it really so?

Lee, In Soo, with his precise technique, is one of the most popular Korean choreographers. His works have been presented in Festival Fringe (Edinborough), Internationale Tanzmesse NRW (Dusseldorf), Daegu Dance Festival (Daegu, South Korea). The solo performance A FIRST MEET has been presented in Seoul, South Korea; Beijing, China; Hungary; The Czech Republic and other places.

Main prize at the ‘A Tanc festival’, Hungary Veszprém, 2018

The ‘SCF Prize(1st Prize)’ in Professional (Solo&Duet) and the ‘SCF Dance Critic Prize’ at the Seoul International Choreography Festival, 2017.

Born in 1982, Lee, In Soo graduates from the Korea national university of arts, where he has been teaching dance in the past 8 years. In 2003 and 2004 he is part of the dance group Mio Greco & Pc from the Netherlands and takes part in multiple international festivals. After his return to Korea, he joins the group LDP (Laboratory Dance Project), where he works until 2013. Today, he is the artistic director of the contemporary dance company Edx2.

His professional career starts with street dance. However, he is not limited to one art form and also incorporates contemporary dance, acting, pantomime, and other arts in his work. His works are descriptive but also emotional. They tell stories through dramatic techniques and movement of fusion and segregation of the body. Known for the high quality of his choreography, Lee In Soo is contributing to the cultural diversity on the contemporary dance scene in more than 40 cities and 25 countries around the world.

Choreography and Performance: Lee, In Soo