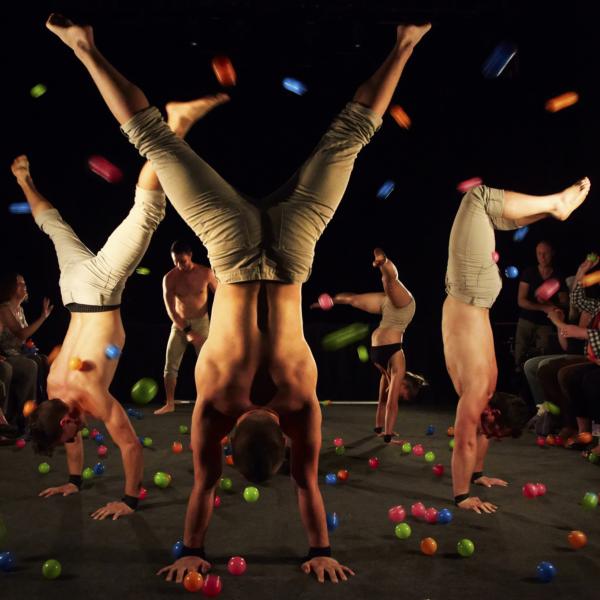 A contemporary circus piece is coming from faraway Australia to premiere on the Bulgarian stage. A SIMPLE SPACE is an extreme demonstration of strength and skills by seven acrobats who will fly over your heads. Hang on because it’s all for real.

There’s no safety net. No ropes. No technical assistance.

The stage is a stripped back circus arena and a spaceport for breathtaking launches for artists who consider gravity a myth. In this raw and delicate performance, the audience will feel the thrill of risk and see every electrical impulse in the acrobats’ bodies.

With nothing left to hide behind, personal narratives shine through. These seven skilled acrobats are ready to push their physical limits without reserve and to challenge the laws of physics. This honesty is the essence of A SIMPLE SPACE.

There is no set and contrived theatrical overlay. There is no fine-tuning, lighting effects or sound effects. There is no make-up or special costumes. No tricks. Instead – brute strength and cat-like agility of real humans supported by driving percussion.

“A total triumph!” – The Guardian

“Cirque du Soleil with a fistful of grit” – Express UK

“This is circus in the 21st Century” Lip Mag

“The gravity-defying stunts performed are truly breathtaking and a joy to watch.” The Stage

Gravity & Other Myths (GOM) is a multi-award winning and well respected Australian acrobatics ensemble. The company creates engaging works of acrobatic art for touring, festivals and corporate clients. Formed in 2009 in Adelaide, South Australia, the ensemble creates and directs their own work with emphasis on an honest approach to performance, moving away from traditional circus and theatre models, towards a fusion of acrobatic physical theatre.

The company’s second work A Simple Space premiered with short formats at Adelaide Fringe 2013 and Edinburgh Fringe 2013. A low-fi but high skill production, A Simple Space is a worldwide sensation that leaves audiences standing and formidable string of 5-star reviews in its wake. A Simple Space has toured to 14 countries on six continents, wowing audiences with a universal physical language and joyful energy.

Created & Performed by Gravity & Other Myths

This project has been assisted by the Australian Government through the Australia Council, its arts funding and advisory body.

We use cookies to ensure that we give you the best experience on our website. If you continue to use this site we will assume that you are happy with it.OkPrivacy policy