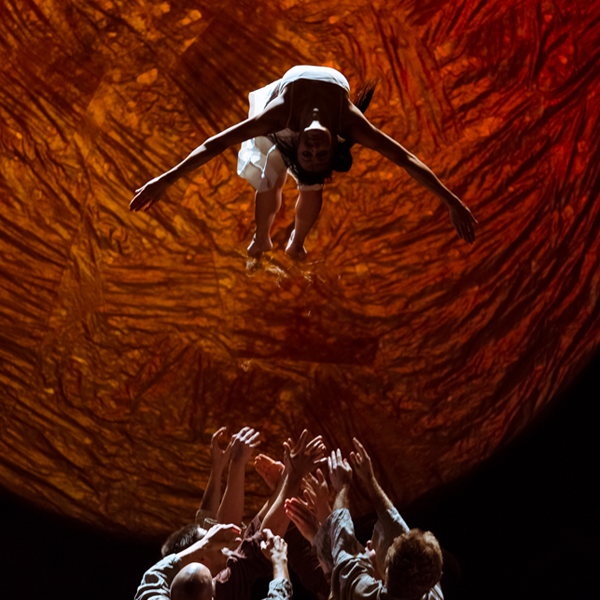 Humanoid barbarians are fighting for survival on the ruins of a civilization. A girl finds love but the beauty of the moment seems doomed into the clinch of darkness. She and other survivors are going to experience hope, disappointment, joy, fear.. and death while the mighty Fate ties the knot.

A classic comes from Hungary renewed, with clear movement techniques and distinct theatrical scenery. Choreographer Tames Juronics places an invisible mirror on the stage to reflect our emotions and help us understand ourselves.

One of the most famous stage pieces, “CARMINA BURANA”, amazed the world in the 1930s. Composer Carl Orff created an impressive cantata based on the notorious Middle Age poetic collection of the same name. Its most popular extract relates to Fortuna.

Fate might be deceitful, merciless or good yet is always inevitable.

By experiencing disappointments, joys, fears, everyone can understand ever more about themselves, about faith and possibilities – about human nature.

Tamas Juronics is one of Hungary’s leading choreographers. By now Juronics has grown to be an internationally acclaimed creator with 65 choreographies under his name.

The classical music repertoire of the company consists of theatrical dances based on the works of composers such as Tchaikovsky, Stravinsky, Bartók, Orff, Eötvös, and the company’s varied repertoire also contains choreographies composed to musical montages. Founded in 1987, the Szeged Ballet changed its name to Szeged Contemporary Dance Company in 1993 with appointing Tamás Juronics as artistic director and András Pataki as executive director. Since 2000 the Szeged Contemporary Dance Company is working as an autonomous company in a form of prominently public benefit foundation.

The Szeged Contemporary Dance Company is a constant guest of local and oversea dance stages.The company performs 80 – 90 times a year in Hungary and has produced 112 shows since the beginnings. During their tours the ensemble played in 27 different countries 178 times in the last 28 years. The company has had over 200 Hungarian and international dancers in its ensemble.The company’s artistic style is well distinct today. Respecting the ‘laws of stage’ is a defining attribute in their shows, so is the using of theatrical means – in the literal sense of the word – that are enhancing the effect and intensity of vision.

CARMINA BURANA is presented in Plovdiv with the support of The Embassy of Hungary in Sofia, Hungarian Cultural Institute, Hungarian Academy of Arts and the National Cultural Fund of Hungary.