CHAPTER 3: THE BRUTAL JOURNEY OF THE HEART 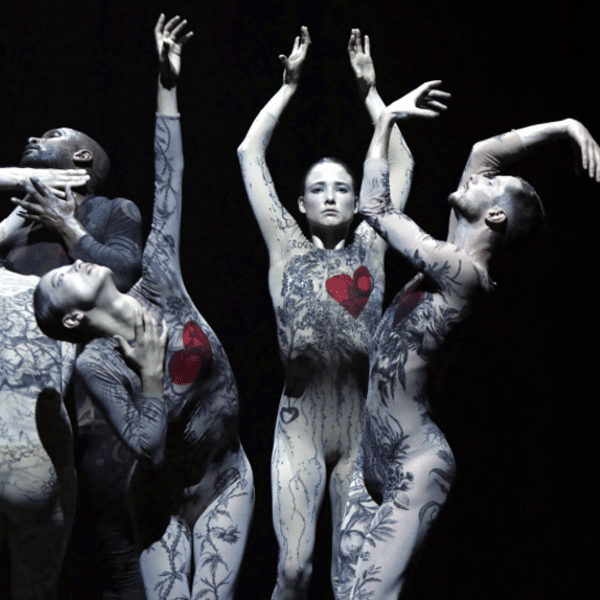 One of the most prominent Israeli dance companies joins ONE DANCE WEEK 2019 with its newest piece. L-E-V Company, the name of which includes the Hebrew word for heart (lev), led my choreographer Sharon Eyal and multimedia designer Gai Behar will present their latest production – CHAPTER 3 – in Plovdiv. We’ll see the show on the 5th of October in just days after its world premiere on the 26th and 29th of September in Germany.

“…things get broken, and sometimes they get repaired, and in most cases, you realize that no matter what gets damaged, life rearranges itself to compensate for your loss, sometimes wonderfully.”
– Hanya Yanagihara | Little Life

CHAPTER 3 continues the theme of love following the company’s previous two productions – OCD Love and Love Chapter 2. Both performances captured audiences around the world presenting the depth, beauty, drama and impossible of the greatest of all feelings – love.

OCD Love is probably the most significant work by L-E-V Company. It blends urban eroticism, fashion, electronic music, and extreme movements driven by extreme emotions. The work is about the love that always misses, or about lovers who keep missing each other. It’s about the absence of the only one here and now. The distance between us, the hole in time and in space, the different rhythms – all they need to balance so that we are not alone.

The performance is inspired by writer’s Neil Hilborn powerful poem – confessions of a man with OCD. It deals with the Obsessive-compulsive disorder as a repeatedly emerging challenge for love and for life. The poet describes how a person with OCD experiences the moment of falling in love, dating, giving “perfect kisses” to the woman next to him and so on. While he sorts food by color and counts how many times he has closed the door, his habits overrule and love goes away.

LOVE Chapter 2, as authors put it, is „a reason to cry“. This a replate tale about loneliness, despair and attempts to reconnect. The performance offers an overwhelming demonstration of human sensitivity, functioning being broken into crumbs of love, dreaming in a blind body.

CHAPTER 3 focuses on processes of repair and coming to new arrangements. During ONE DANCE WEEK this fall, Bulgarian audiences have the opportunity to see the performance before its debut on many important international festivals and theaters.

“The major legacy of Sharon Eyal and Gai Behar is a lexicon of movement that is unlike that of other artists. It’s their own language, full of passion and, at the same time, marvelously delicate“ – Haaretz

Sharon Eyal danced with the Batsheva Dance Company from 1990 to 2008. She worked as a choreographer and associate artistic director from 2003-2004 and house choreographer from 2005-2012. With Batsheva, she worked under notorious choreographer Ohad Naharin who created his original “Gaga” technique. She added to this famous dance improvisation language and continued to expand her movement vocabulary.

As a party producer, Gai Behar  was taking a big part of Tel Aviv nightlife scene as well as a curator of multidisciplinary art
events from 1999 till 2005. By that time Gai joined Sharon Eyal and has collaborated on their creations ever since.

Since 2006, collaborators Sharon Eyal and Gai Behar have been a significant voice in the artistic community, creating
a continuous stream of critically acclaimed original works for dance companies around the world. The music by Ori Lichtik, оne of the founding fathers of the techno scene in Israel, adds a typical soundscape of the works of the company

L-E-V could be equally at home at a techno club or opera house. L-E-V is the confluence of movement, music, lighting, fashion, art and technology. Each uniquely expressive while emotionally entwined.

Over the past 7 years since L-E-V was founded, the company had more than 200 performances some in the most exclusive venues and festivals around the world such as: The Joyce Theatre – NYC, Jacob’s Pillow, Sadler’s Wells – London, The Montpellier Danse Festival, Julidans – Amsterdam.

L-E-V Company is presented in Plovdiv with the support of The Embassy of Israel in Bulgaria.