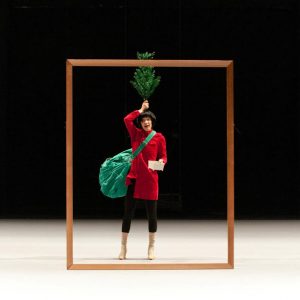 Colors, they say, make life beautiful. But now that we have captured all nuances, tones and shades in high-resolution, are not we conversely captured by digital images? The Japanese performance Chroma is a play of light and shadow, visual effects and large graphics that chase and overwhelm the players on stage.

Director  Shiro Takatani employs the laws of physics and contemporary optics to challenge spectators to find meaning in the flood of images that inundate us daily, visual data through which we create the world we see around us.

Takatani found inspiration in Simon Fisher Turner’s music and the book Chroma: A Book of Colour (1994), the last work of the English artist-filmmaker Derek Jarman. As in the book, a meditation on vision and its loss — Jarman suffered from AIDS-related blindness — the performance intersperses poetry, anecdotes and quotes from thinkers Aristotle, Leonardo, Newton, Goethe and Wittgenstein.

We can only know the present within the dimension of time, and only grasp a small quantum of space. As we mature, we realize how insignificant our existence is, like a dot in ever-growing space. We try to orient ourselves within this linear labyrinth the only way we can, through events.  By accepting the uncertainty, and drawing ourselves out of the relentless chaotic current of history, we may concentrate on the expression of the beautiful in the everyday.  The theme of our experiment is: How are we to appreciate image and sound today?  Ever since the shift from analog to digital technologies, we have been blessed with high-resolution sound and video, but have we found meaning in them? Have we forgotten everything we experienced before? Like Spinoza, who polished lenses in order to see the beauty of the world, we have technologies today that can capture the world moment by moment in minute detail, but do we employ them in any meaningful way?  So far, it seems, we’ve only reached convincing façades, not the actual, often harrowing beauty of the real. Chroma is not based on a script; it is rather an experiment thatattempts to rediscover art as pure experience. — ShiroTakatani, January 2012.

Shiro Takatani has been active in performing arts for many years. A graduate of Kyoto City University of Arts, he and fellow students founded Dumb Type in 1984. His breakthrough as an artist came with his first solo installation frost frames (1998), which drew acclaim from many cultural organizations around the world.

Alongside his activities within Dumb Type, Takatani has created a number of installations and performances under his own name. He was commissioned by the Natural History Museum of Latvia in Riga to create two video installations: Ice Core and Snow Crystal for the 2005 group exhibition Conversations with Snow and Ice, dedicated to Ukichiro Nakaya’s research on snow and ice and nominated for the 2007 Descartes Award for Excellence in the Explanation of Scientific phenomena.

He also joined the three-week British arctic expedition “Cape Farewell: a cultural response to climate change” together with scientists, writers, journalists and artists from different countries. The related group exhibition was presented at the National Museum of Emerging Science and Innovation in Tokyo, in 2008. Takatani’s works have been shown in the United Kingdom, France and the United Arab Emirates, among other countries. His installations have also been selected for various museums’ permanent collections.

Takatani is the creator of three theater/dance performances: La chambre claire (2008), after the Roland Barthes essay, CHROMA (2012), inspired by Derek Jarman’s Chroma: A Book of Color, with original music by Simon Fisher Turner, and ST/LL (2015) in which he explores whether “art or science can ever truly express this hourglass world.”

In 1990, Takatani participated with critical theorist Akira Asada in the art project Stadsmarkeringen Groningen – Marking the City Boundaries, led by architect Daniel Libeskind to mark the 950th anniversary of the City of Groningen in the Netherlands. In 1998, he was commissioned by Art Zoyd and the Lille National Orchestra to create video images for a project combining symphonic music and new technologies.

Takatani has also collaborated with the fog sculptor Fujiko Nakaya in the 2001 Valencia Biennale, where they created the harbor front installation IRIS, followed by two more large-scale installations with her: Cloud Forest (2010) at the Yamaguchi Center for Arts and Media [YCAM], and Asuka Art Project (2011) at the Asuka Historical National Park in Nara.

Founded in Kyoto in 1984, Dumb Type is comprised of artists from diverse backgrounds— dance, theater, music, design, architecture, programming—all contributing to a great variety of stage and installation productions over the years. Regardless of genre, the essence of their work addresses socio-political apathy, and the today’s technological reality on a global scale.

Inspired by Derek Jarman’s Chroma, A Book of Colour [Century, 1993], with thanks to
The Estate of Derek Jarman

The show will be presented in Plovdiv with the support of EU JAPAN FEST, in partnership with Plovdiv 2019, Embassy of Japan in Sofia, Friends of Japan in Bulgaria club,  Agency for Cultural Affairs Government of Japan, for the year of 2017, and Japan Foundation.