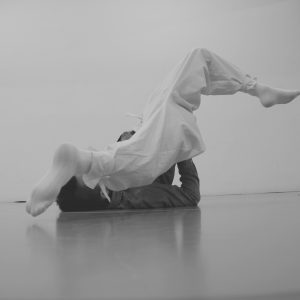 COLLECTIVE LOSS OF MEMORY is an extraordinary performance, impressive with its aesthetic qualities, as well as the high level of technical realization. During the creation of their project, Jozef Fruček and Linda Kapetanea are often coming back to the archetypal themes such as forms and parables of the good and the evil. Together with original music and light design they are creating fascinating and impressive images.

The successful co-operation between the three choreographers – Lenka Ottova, artistic director of DOT504, Jozef Fruček and Linda Kapetanea known also as RootLessRoot continue their co-operation after a lot of former internationally successful projects.The emphasis on equal creative contribution of the choreographers and the dancers is one of the typical components in the creation of the DOT504 projects.The preparations of the new project have started by a big audition with around 500 applications from the dancers from the world. The concentration of excellent dancers from which the choreographers have chosen the best ones was stunning and extraordinary. Finally, Jozef and Linda have chosen for the new project 5 distinctive male dancers.

Jozef and Linda were both members of the prominent Ultima Vez and that´s why their choreographies are always build with lots of dynamics and are abounded with unprecedented high physical performance. The new project which its creators describe as „study of provocation“ will present five excellent performers from different parts of the world – Israel, Belgium, France, Sweden and Slovakia. What will bring this international encounter which opens the theme of violence in contemporary society?

“Together with five exceptional performers, we will dive into the powerful social phenomenon of the great pleasure human beings take in killing and participating in violence. We will examine this ‘run-of-the-mill’ topic through the history of art practices and especially its criticism appearing within the fine arts and cultural sector. It will be a study of provocation that does not touch the obvious, but rather examines subtle aspects of the human behavioral evolution. As such, we will ask ourselves what kind of evolutionary pressures we have passed and continue to pass through in today’s unprecedented lifestyle, which is oriented only towards selfish momentary pleasures.“ – Linda and Jozef said.

The successful co-operation between the three choreographers – Lenka Ottova, artistic director of DOT504, Jozef Fruček and Linda Kapetanea known also as RootLessRoot Company, began with Holdin’ Fast (2008)a project that received the Total Theatre Award nomination for the Best Young Company at the Fringe Festival Edinburgh in 2008 and launched a series of international success and recognition; a year later a following project 100 Wounded Tears (2009) was awarded with The Herald Angels Award at the Fringe Festival Edinburgh. COLLECTIVE LOSS of MEMORY is being created in co-production with Tanec Praha.

DOT504 Dance Company – physical dance theatre company – is characterized by high technical level, creativity and distinctive personalities among creators and interprets of each project. Blurring of boundaries between theatre and dance is one of the main characteristics of the company together with an emphasis on the creative contribution of the dancers and their technical and interpretive level.

Jozef is a founding member of RootlessRoot. He graduated from the Academy of Music and Theater of Bratislava, completing his PhD Thesis in 2002. During 2002-2005 Frucek was a member of Wim Vandekeybus’ Ultima Vez, creating Blush (stage and film versions), Sonic Boom and etc. During 2005-2006 he collaborated with the Royal Flemish Theatre in Brussels (KVS) on his own work. Since 2012 Frucek is member of the teaching personnel of the University Ludwik Solski State Drama School of Krakow in Poland.

Graduated from the Greek State School of Dance in Athens. With a scholarship from the Greek State Scholarship Foundation, she later studied at the Merce Cunningham Studio, Movement Research and Dance Space, New York. In 2002, she was awarded by a Greek Ministry of Culture as “the best performer” of the season 02/03. Between 2002- 2005 she performed with Flemish Ultima Vez Company/ Wim Vandekeybus (Blush, Blush Movie, Sonic Boom, Puur, Here After Movie). From 2006 – 2012 Linda was on the teaching faculty at the Athens State School for Dance.

In 2006 Linda Kapetanea and Jozef Frucek formed RootlessRoot as a vehicle for their own productions, research and teaching. Together they are developing the research program of Fighting Μonkey – an applied methodology of martial arts in the education of dancers, actors and movement practitioners. They regularly give workshops at international festivals and in vocational schools. From 2006 – 2011 both Frucek and Kapetanea were on the teaching faculty at the Athens State School for Dance.

DOT504 Dance Company is coming with the support of Czech Center in Sofia and Ministry of Culture Czech Republic.