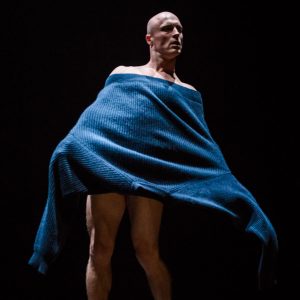 It’s been a century since the writer who created the rules of games with imagination Julio Cortázar was born. Today magical realism has taken hold of many territories beyond books with computer games and performing arts as two of its playgrounds. LOW AIR Vilnius city dance theater unites both in their visual dance performance GAME OVER inspired by Cortázar’s vivid literary legacy.

The outcome is a dance performance with visual effects and live music that revolves around game perspective. Passing levels up, two dancers face unexpected challenges between fiction and reality. Here comes the blue pullover trap – a reference to Cortázar’s famous story of a man trapped within his favorite winter cloth.

With minimalist style and contrast action supported by drums and electronic music, GAME OVER invites the audience to witness a collision of reality and dreams. Anything can happen. If this game is on, will you join in?

GAME OVER is part of FOCUS LITHUANIA of the ONE DANCE WEEK festival – a program of 3 contemporary dance pieces from Lithuania, curated by Gintarė Masteikaitė from Lietuvos šokio informacijos centras. The other shows are GODOS by Šokio Teatras Aura (October 12) and CONTEMPORARY? by Menų spaustuvė/ Arts Printing House (October 14).

GAME OVER was amazing – so much passion and sensitivity, and body virtuosity, and humour, and irony. It’s like my dream about Rene Magritte paintings, computer games and rave parties all in one, Julio Cortázar is also here as promised. – Olia Zhuk, Creative director at Dovzhenko Centre (Ukraine)

LOW AIR debuted with their first dance performance Feel Link in the Arts Printing House | Young Stage Artists’ program Open Space back in 2011. The Ensemble-debut showed a reflection on the impalpability on feelings in a modern society and were nominated for the highest performing arts award in Lithuania – Golden Stage Cross. In 2014 Airida and Laurynas won the Golden Stage Cross Award as best choreographers for their second piece “Home Trip” that presents a fusion of dance, theatre, music, and theatre.

Airida Gudaite is a professional dance teacher. She gained her bachelor’s and master’s degree in dance education in Lithuanian University of Educational Sciences.

Laurynas Zakevicius is a social pedagogue who uses the artistic potential of dance in resocialization of young souls.