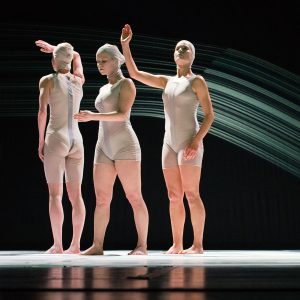 FOCUS LITHUANIA: GODOS is a performance in two parts

The word “godos” has disappeared from daily Lithuanian vocabulary. It’s time to bring it back to life through the art of dance. GODOS, created by Lithuanian and Norwegian choreographers, is a tangle of past, present, and future – a world where feminine sensuality, secret mythological creatures, and futuristic visions meet.

AURA Dance Theatre and famous Lithuanian choreographer Birutė Letukaitė reflect on „godos” through recreating popular myths and legends from the Baltic country. What is hiding in the fur of a bewitched werewolf? What spells do contemporary hags use? Who brings the luck if we don’t believe in brownies anymore?

Dancers move in patterns, forms and the rhythm that reminds the clattering of weaving looms. Threads are being weaved as colorful as life, full of thoughts about who we are today and who we will become tomorrow.

Norwegian choreographers Anne Ekenes and Pia Holden (Panta Rei Dance Theatre) take inspiration from the interpretation of Godos as the song of the heart. The music for the piece is composed by Antanas Jasenka – a famous contemporary composer in Lithuania, working with best theatre directors in Lithuania and abroad.

GODOS is part of FOCUS LITHUANIA of the ONE DANCE WEEK festival – a program of 3 contemporary dance pieces from Lithuania, curated by Gintarė Masteikaitė from Lietuvos šokio informacijos centras. The other shows are GAME OVER by LOW AIR Vilnius city dance theater  (October 13) and CONTEMPORARY? by Menų spaustuvė/ Arts Printing House (October 14).

Birutė Letukaitė – two Golden Stage Cross awards – for choreography and for significant input to the contemporary dance art of Lithuania.

High-quality, precise and harmonious movement technique is the calling card of AURA Dance Theatre. The second part of Godos features specifically dehumanized movement and choreography that equates to a Swiss watch. Speed, coordination, control, dynamics, target synchronization – all of this is discovered in Godos. – Kristina Apanavičiūtė, “Kūną jausti kūnu” (Feel a body with a body), www. m-puslapiai.7md.lt,

Awesome! Wonderful! There are no words to describe the miracle that we have seen tonight. Thank you, stars. That really inspires. Greetings and a trillion thanks. – Wolf-Eckart Dietrich, German organist

AURA Dance Theatre promotes the expression of contemporary dance in Lithuania. Dance studio “Aura” was established on Birutė Letukaitė initiative in 1980 and was registered as Kaunas City Theatre in 1995. During the years of its existence, the theatre created and shaped the face of Lithuanian contemporary dance with more than 50 domestic and international awards up to date. The studio has trained a great number of professional dancers who are well-known worldwide. It is still directed by the prominent choreographer Birutė Letukaitė.

AURA is constantly working on various international projects, cooperates with foreign and Lithuanian choreographers and artists of various fields. For 27 years, AURA Dance Theatre has been organizing the International dance festival “Aura” in Kaunas. It is the oldest as well as one of the biggest dance festivals in Lithuania. The event has eventually become an integral part of Kaunas city culture. The festival is drawing local audiences, dance professionals and producers from the whole country, the Baltic region and abroad. The festival is sponsored by Lithuanian Ministry of Culture and Kaunas City Municipality.