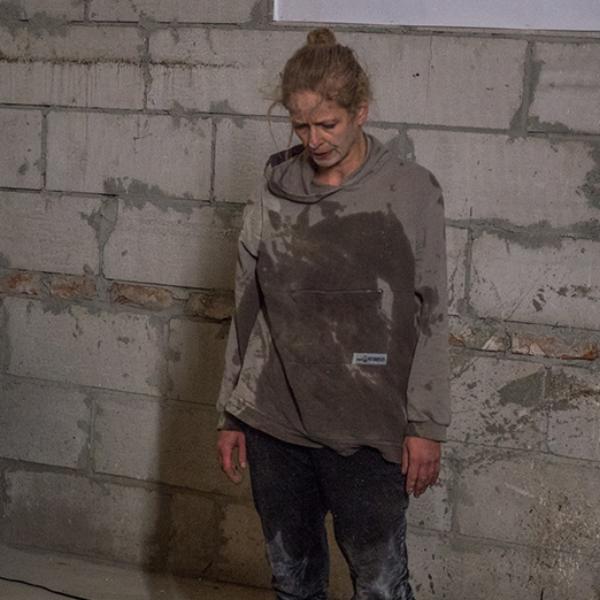 Aurora Lubos reaches out to the Western world for compassion, although many have already turned her down. In Poland, her home country, among others, the refugee crisis has caused anger and slammed doors. What would a contented European feel towards the outsiders, those strangers fighting for survival? Are they truly welcome?

The choreographer poses this question to the audience and the broader public, both in Poland and in Europe. Her powerful solo is a plea for humanity in protest against ignorance. It is a call to those who live in safety but are reluctant to take in others— those who flee war, conflict, oppression, death, hunger.

„The piece was my commentary on immigrants dying at sea, a transposition of those images onto our Polish, tangible reality.” – Aurora Lubos

A key element of the show is a rendering of the performance From the Water, which took place on a beach in the Polish town of Sopot in mid-October 2015, in recognition of World Refugee Day.

‘When Aurora Lubos puts on the hands of a woman from the audience a rag doll that imitates a human body, I have no doubt what I am watching – it is a pietà, a wail of the Western world over those who did not survive a sea journey. […] It was a beautiful gesture. What remains in me the most is humanism that overflows this performance – a deeply human attitude that makes us respect every life.“ – Izabela Szymańska

Aurora Lubos (1977) is an independent dancer associated with the Polish and British contemporary dance scene. She has created several outspoken solo pieces, covering such topics as domestic violence, among others. For 15 years, she was an actor with the Vincent Dance Theatre. She is the author of solos (Zanzibar; Unfinished; Knife, Horse and Stairs; Acts; Thou Shalt Not); installations/performances (No. 1; Four Corners; Act for Two – Leftovers; Without Home; Out of Water) and animations (Winter 2010 cycle).

The productions has been presented as a part of the “Choreographic Territories – new paths of the avant-garde” project, held in collaboration between the Institute of Music and Dance, Hellerau European Centre for the Arts, East European Performing Arts Platform, Art Stations Foundation by Grażyna Kulczyk and Lublin Dance Theatre. The project is held by the Adam Mickiewicz Institute as part of POLSKA 100, the international cultural programme accompanying the centenary of Poland regaining independence. Co-financed by the Ministry of Culture and National Heritage of the Republic of Poland as part of the multi-annual programme NIEPODLEGŁA 2017–2022.