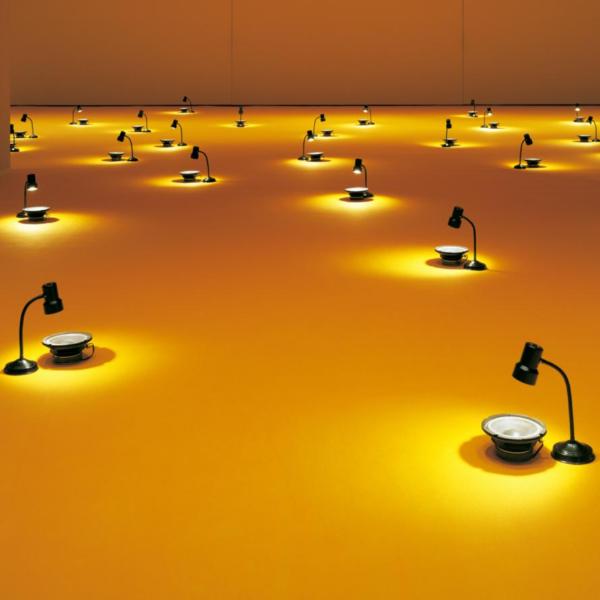 GOLDEN DELUSIONS is an installation-performance, where four artists interweave sound, light and movement in total unity, creating an imaginary world inspired by color and symbolism. Hans Peter Kuhn’s light and sound installation provides the basis for a dialogue between the choreography / dance of Akemi Nagao and Junko Wada, joined by the sound composition and performance of violinist Biliana Voutchkova.

As in their previous collaborative work in different combinations, the artists intend to “investigate the modes of corporal and aural listening, the variations of physical connections between musician and dancers and the modifications of space as created by light and sound through the interactions of the performers with the installation.” (Compovisation, 2014).

Biliana Voutchkova is a thoroughly engaged violinist, composer-performer and improviser who combines regular performances of major solo violin/ensemble works, new music by contemporary composers often written for her, and her own work with performative, long-length formats, real-time composition and improvisation. Her constant research as a creative artist spans the widest possible range of sound and movement and extends her sonic, technical and physical capacities evolving into the development of a highly individual artistic language.

Her solo album “Modus of Raw” and the recent triplet “Blurred Music” received worldwide critical acclaim. Biliana has received the Composition Stipend from the Berliner Senate and grands from INM Berlin, Musikfonds and the Trust for Mutual Understanding in New York.

Hans Peter Kuhn was born in Kiel (DE), and lives and works in Berlin (DE) and Amino/Kyoto (JP). The prestigious “Golden Lion” award of the 1993 Venice Biennale was given to Robert Wilson and Kuhn for the installation “Memory/Loss”. Since 2012, he has been a guest professor at the master class Sound Studies and Sonic Arts at the Universität der Künste (University of the Arts) in Berlin (DE).

There he worked as a sound designer on the productions of Peter Stein, Klaus-Michael Grueber, Luc Bondy and others. In his last season at the Schaubühne he got together with Robert Wilson to co-create “Death, Destruction & Detroit” as their first collaboration, followed by more than 30 other productions. These coproductions include not only theater pieces but also videos and installations.

After Kuhn left the Schaubühne in 1979 he concentrated more and more on his own artistic work and has created a huge body of work since then. He mainly created sound- and light installations, radioplays, composed film music, and music and environments for theatre and – since 1989 – also for dance.

In 1985 he founded – in collaboration with others – Berlin’s first private radio station which later became RADIO 100 where he had a weekly show on new music called “Die Audionauten” (The Audionauts) which was run in the final years by Niko Tenten. This program became popular not only in the former West Berlin, but also in the east part of the city where people enjoyed hearing new music unavailable in their country at the time.

Akemi Nagao is a Berlin-based artist, choreographer and dancer. She is interested in personal dance and movement, which means dance and movement coming directly out of one’s emotions, history, memories, desires or imagination, all strongly connected with one’s own background – family, personal and political milieu, emotional universe, etc. She has done ballet, street dance, soul, contemporary and improvised dance. She has written about street dance, traditional Indian dance and Hawaiian dance (Hula) at Osaka International University in Japan.

Since 2011, as a dancer, she has worked with a number of choreographers (Choy Ka Fai, Eva Baumann, Yoshiko Chuma, and more) and artists in Europe and Asia. Also as a choreographer, she has created her own work in collaboration with many different kinds of artists (Anna Kubelik – architect, Bettina Neuhaus – choreographer/dancer, Michael Tuttle – sound artist, Min Oh – visual artist, and more) at Akademie Schloss Solitude, Villa Massimo, Kunstlerhaus Bethanien Berlin, as well as others.

She in currently finishing her studies in Master Choreography (maC) at Hochschulübergreifendes Zentrum Tanz Berlin (HZT), and working to address questions of discrimination, biases and invisible walls in human relationships.

With the support of the EU Japan Fest Committee.

We use cookies to ensure that we give you the best experience on our website. If you continue to use this site we will assume that you are happy with it.OkPrivacy policy