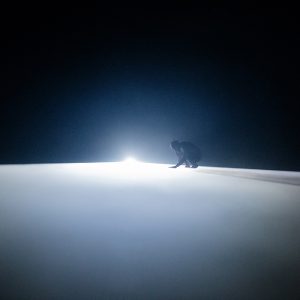 Two dancers play one and the same character, at different times of his life. In youth and in old age, they move in different ways, express themselves differently. They have become unlike each other, as the march of time inevitably changes the individual. If we could journey back in time, would we change anything? Avoid the mistakes? And what would happen then?

The Czech audiovisual show GUIDE is an illumined panorama of life, where before and now merge, in order to summon the other “I”. Choreographer Vera Ondrašíkova will debut in Plovdiv for the 10th anniversary of ONE DANCE WEEK festival; with this award-winning dance spectacle.

The work is beautifully done, with pristine lighting effects and a magical precision of movement. – Laura Kumin, Director at Certamen Coreográfico de Madrid

I thought it was very interesting, I haven´t seen anything like it before, they were playing with my eyes, which I always enjoy, and it was very inventive. I personally like to see an old body on the stage and I think  this body has a lot of embodied knowledge that is accessible to us almost immediately just by standing there. – Bush Hartshorn

Vera Ondrašikova graduated from Academy of Performing Arts in Prague (Choreography) and Fine Arts. Her dancing career goes through common projects with Czech and international productions to reach the First Prize at Masdanza Festival in the Canary Islands, Spain in 2005.

Her performances have been presented at Tanec Praha Festival, the Biennale de la danse in Lyon, Aerowaves Festival in London, Aerodance in Amsterdam, Cynetart in Dresden and Masdanza in Spain. After spending 3 years in Dresden (2010-2013), Vera returned to her homeland in 2013. She choreographed Vaclav Havel’s Anticodes at the New Scene of The National Theatre in Prague. The show toured New York, Miami and Washington.

Vera has led workshops for many companies such Laterna Magica, Prague Chamber Ballet, Archa Theatre Lab and countless others in Germany, Spain, Mexico and UK (BeNext).

Dan was in charge of the visual effects in the Czech National Theatre’s play based on the experimental poetry by Vaclav Havel. In 2015, together with the Norwegian musician Biosphere, he founded the creative platform for audiovisual research INITI.org.