I DANCE BECAUSE I DO NOT TRUST WORDS 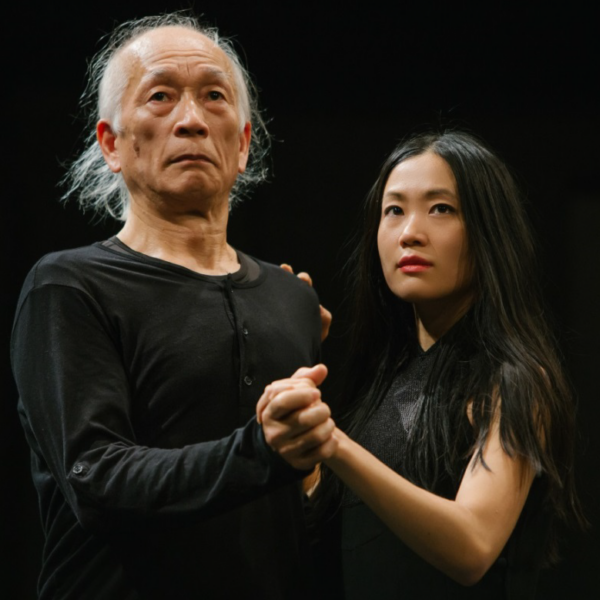 Why do you smoke?

Why did you listen to Greek music when we were little?

What is your purpose in life?

Do you love my mother?…

A daughter can ask her father so many questions. Long made nearly impossible by a Japanese tradition of quiet reserve, they bloom in a daughter-father relationship made stronger by art. She is enthralled by the beauty of movement, while he is in awe of the motionless eternity of sculptures. She left her country a long time ago and he decided to follow her as a parent and as an artist. They will try to find something long forgotten and to communicate through the language of dance.

Choreographer Kaori Ito invites her father Hiroshi Ito onstage to rediscover one of the strongest family relationships. Distances and differences will melt away, uncovering love, previously muted. Words, as this duo from Japan demonstrates, are not to be trusted.

She is no longer Dad’s little girl. He might have lost his paternal authority but is now ready to dance with his daughter.

„My father always wanted to maintain his authority over me, perhaps so that I remain his daughter. Now that I’m away, paradoxically I realise that I feel closer to him artistically, but far away emotionally. Today I realise that it is he who strives to please me. Now he respects me as a dancer. He recognises me as a professional and that is why he wants to dance with me.” – Kaori Ito

Kaori Ito was born in Japan and began studying classical ballet at the age of five. At the age of twenty, she moved to New York to study at the Purchase College Conservatory of Dance. After returning to Tokyo, she graduated in sociology and received a grant to return to New York as part of the Japanese Government’s Program of Overseas Studies for Artists. She studied at the Alvin Ailey Dance Theater.

As early as 2003, she played the leading part in Philippe Decouflé’s Iris, then joined Ballet Preljocaj and worked with them for 4 seasons. She has participated in works by many leading choreographers and dance companies such as the opera The House of The Sleeping Beauties by Guy Cassiers and Sidi Larbi Cherkaoui.

In 2008, she created her first show, Noctiluque, at Vidy-Lausanne. In 2009, she presented her second creation, SoloS, at the Théâtre du Merlan in Marseille. This show was recreated for the Lyon Dance Biennale in 2012. Island of No Memories was born in 2010. In 2012, Aurélien Bory dedicated a portrait to her in Plexus, where she co-wrote the choreography. After dancing with Alain Platel in Out of Context, Kaori Ito created Asobi, produced by Les Ballets C de la B. In 2014, she created La Religieuse à la Fraise with Olivier Martin Salvan as part of Sujets à vif at the Festival d’Avignon.

As a polymorphic artist, she also makes videos (Carbon Monoxide—2004, The Sea is Calm—2006, Niccolini—2008 with James Thierrée, Damien Jalet and Niklas Ek). Ito also creates paintings and regularly collaborates in theater, while in the cinema she worked with Alejandro Jodorowsky in Poesía sin fin, released during the Cannes’ Quinzaine des réalisateurs in 2016.

In 2015, she created I Dance Because I Do Not Trust Words, a duo with her father. In 2017, she produced Fire Me Up for the Antigel Festival in Geneva, a performance about love with her boyfriend Théo Touvet. In 2018, she created her latest solo Robot, Eternal Love.

Hiroshi Ito is a sculptor who lives and works in Tokyo, Japan. He began his career in theatre, staging and set design. Having graduated in 1974 with a Master of Fine Arts and Music degree focusing on sculpting, he designed street posters in Tokyo. He has also worked on an installation for Tokyo’s Disneyland and on statues for the zoo, as well as creating trophies for the Japan Music Awards. He has participated in projects in Finland, Portugal and other countries.

Design of masks and outside view: Erhard Stiefel

I DANCE BECAUSE I DO NOT TRUST WORDS is presented in Plovdiv with the support of the EU Japan Fest Committee.