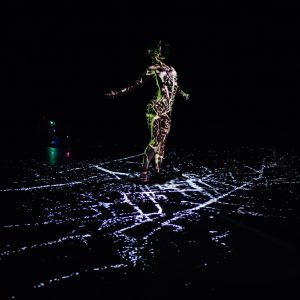 “From the roots of rituals is born a dance for two men. A face-off, non-confrontational, but explorational quest for the possibility of simultaneous movement. The gesture of the ritual orbits in a way, even to allow for a drop of humor. ” – Zita Sándor

József Trefeli and Gábor Varga create a dance performance for a public space, exploring together the rhythms and rituals of life in a high energy, captivating performance. This meeting of two male dancers connected by being from the Hungarian Diaspora, one born in Australia and the other in the USSR, brings them shoulder to shoulder as they delve into their common heritage. They come together in dance, the art form they share, even though it was learnt on opposite sides of the globe.

Through their common vocabulary of vibrant body percussion where even the most basic rhythms are extremely complex, with clapping and slapping, clicking and stamping, they create a breathtakingly energetic dance of lightning fast footwork, leg twisting and weaving, high kicks and turning jumps.

In many languages when two people accidentally say the same thing simultaneously, there is a word that must be quickly said to ward off bad luck: the French say “chips”, the English say “jinx” and the Hungarians say “103”.

József Trefeli is Australian of Hungarian origins, graduate of the VCA Melbourne University, József dances 3 years in Australia before beginning his travels to discover the world. Geneva, Switzerland has been József’s home since 1996.

On 6 continents, more than 40 countries, József has achieved critical acclaim for his many and varied dance performances and numerous choreographic works. The diverse range of styles in which József choreographs include contemporary dance, cabaret, theatre, musical comedy, and opera. József has proven his ability to create solo work as easily as directing and choreographing casts of up to 50. József Trefeli has also danced for the companies Skree Wolf, Greffe, Drift, Utilité Publique, Philippe Saire, and Da Motus, and has acted in two plays with the Company Korpüs Animüs.

The József Trefeli Company was founded in 2005 for a commission to choreograph for the Association for Contemporary Dance (ADC) in Geneva. His creations have toured in Australia, Central America, Africa, Europe and Switzerland. József teaches classes and workshops to amateurs, professional dancers, and dance companies.

Gyula Cserepes is a dancer, performer and choreographer, originating from Bečej, Vojvodina, Serbia. Ex-member of the companies: “Central-Europa Dance Theater” (HU) and “En-Knap Group” (SLO). He studied at the “High-school of Folk Arts” and the “Budapest Contemporary Dance Academy”, in Budapest. Among other teachers, dancers, directors and choreographers, he worked with David Zambrano, Anton Lachky, Milan Tomašik, Simone Sandroni. His work as a choreographer includes the interdisciplinary, site-specific performance “Revive the Castle”, and the performances “New Age Gypsies” and “The bridge”, which was premiered in Volksroom, Brussels in November 2013. Gyula is currently developing a new work “Chameleon”. Since 2013 Gyula collaborates with the Geneva based Compagnie József Trefeli. With the performances “JINX 103” and “UP”, they have toured extensively in Africa, America and Europe.

The performance of JINX 103 is part of „Dance connected – establishing capacity for strengthening and diversifying the Bulgarian contemporary dance scene“ is а project by One Foundation for Culture and Art that was approved for funding by the Bulgarian-Swiss Cooperation Programme, under the Block Grant Scheme of the Partnership Fund-“Partnership and Expert Fund” (TF PF).