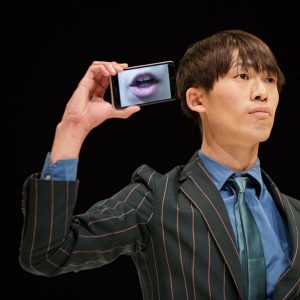 Japanese choreographer Kenji Shinohe presents two solo dance performances related to the modern human life. In【K(-A-)O】, he explores how we express emotions with the keyboard symbols of the information era. What is hiding behind all the emoticons we exchange on a daily basis? Are virtual smiles honest? How can we get back our feelings? [LOVE] is a short story about before to start love. How can we love someone or ourselves without any originality?

A dancer and choreographer, Kenji Shinohe graduated from the Nihon University College of Art and received a scholarship from that university to study at Germany’s Folkwang University of the Arts. Currently living in Essen, he performs as a soloist and leads Die Tokyo Dance Crew and ELTEN. He has received the Grand Prize and Audience Award at the choreography competition at the International Dance Theater Festival in Germany and the Prime Minister Cup, the Sawamoto Tokumi Prize, and the SAF Special Prize in Japan.

…On the internet, we can have a neutral face even if we are happy or sad during a communication, or pretend another emotion which we don’t feel in the present moment. But we send emoticons and symbols according to our own feelings. While doing so, all the infinite expressions and emotion of a human being become poorer and less complex.

Kenji Shinohe goes on stage surrounded by regular objects – a T-shirt, a sign, a smartphone. He illustrates the dominant culture. He follows the others. Just a normal artist. Just a normal human being. Nothing original. How can he love something or somebody without being like everybody else?