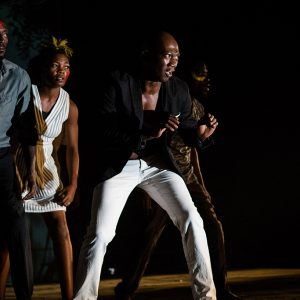 Politics, and the impossibility to get away from them, are dissected and revealed through the art of dance? The KALAKUTA REPUBLIK explores the stations and roles of the contemporary artists on the chess board, while revolutions explode and protest movements wane. The focal point is one brilliant person born in Africa in the last century – Fela Kuti.

The father of Afrobeat, amazing musician and composer, bohemian and polygamist, Kuti made history as rebel prototype in Nigeria in particular and Africa as a whole. On and off the scene, he sharply criticized the regime, the army, corruption, colonialism – which have been festering issues since the 1970s. Kuti proclaimed his estate on the outskirts of Lagos for an independent state. That was the notorious Kalakuta Republic. It was later raised by the military in a siege.

With this vivid and lively performance from Africa, choreographer Serge Aimé Coulibaly offers us one single point for contemplation: what we will do when it’s our turn to demand changes from the government?

Politics is not a fly on the wall in choreographer’s Serge Aimé Coulibaly piece. Born in Burkina Faso, based in Belgium, he has created a political drama refracted through the human body in dance. Seven dancers file in a line on stage with movements that are metaphors of the urgency to live.

Their unique body language is an amalgamation of traditional culture, dance club and jazz culture. The final result is an entirely new style of dance which dashes onward to describe current political and social issues. They take us to the Shrine, a mythical place, both temple and nightclub, where Fela Kuti sang about hope and revolution.

If the spirit of Fela, who remains a source of inspiration to many in Nigeria and abroad, is the central thread running through the performance; then Coulibaly keeps for himself the role of the narrator.

Does he identify with Fela Kuti? Or is he simply himself, a committed artist entangled in the troubles of the world, and those of Burkina Faso, where youths long for freedom and change?

As Slavoj Zizek has been warning anti-government movements for many years: it is not particularly difficult to whip up a crowd and to shout that things have to change. The important thing is what happens on the day after the uprising.

KALAKUTA REPUBLIK is neither a biography of Fela Kuti nor a musical showcasing of his work. Instead, the performance is a little piece of Africa without clichés. Today’s Africa. A continent on the global map that Serge Aimé Coulibaly and his companions are committed to and want to reveal to the rest.

Moreover, KALAKUTA REPUBLIK is an inquiry about the commitment of an artist to their world, their society, the world in general. The obligation to take a position and express themsleves, even when the message is not popular. This idea is the foundation of the entire oeuvre of Serge Aimé Coulibaly.

At the beginning of Coulibaly’s work, Kuti was mainly a source of inspiration, as his music entered the shows. His legacy inspires the entire production. Serge Aimé Coulibaly and his artistic team were inspired by this figure to research what artistic commitment might mean once the artist becomes the leader of a movement.

KALAKUTA REPUBLIK does not offer answers but puts questions on the table. What brings people together to seek out alternatives? Why people need charismatic leaders? How much power do these leaders really have? Are there conditions? How much freedom is possible within a movement?

KALAKUTA REPUBLIK has two parts. Part one is literally in black and white, using the perpetual movement of Fela’s music as the basis of an exploration of this contemporary “leader”.  The second part uses bright colors and diversity of sounds to depict decadence as it takes power over the organization, and individuals fall into delusion.

Which part precedes, and which follows? You choose.

After the creation of “Nuit blanche à Ouagadougou”, the première of which preceded the departure of ousted president Blaise Compaoré in Burkina Faso by a few days, Serge Aimé Coulibaly continues to explore his theme of the absolute need to change our contemporary world. Nuit blanche à Ouagadougou speaks clearly about an African society but Kalakuta Republik puts the entire globalized world on the table.

The spokesman for an entire generation, he turned the stage into a political platform, and music – into a weapon. Arrested over 200 times for his sharp satire against the regime and its corruption, Fela was a true reincarnation of devotion to the homeland and art. He opposed ignorance, oppression and awakened Nigerians in inimitable fashion. Kuti’s compositions, some up to 30 minutes in length, endowed with intricate complexity, have reached jazz clubs all the way to “distant” London. Thus, a new musical phenomenon was born.

Fella Kuti named the independent Kalakuta Republic after his first prison. The Republic was indeed his mansion on the outskirts of Lagos. His band recorded music there until 1977 when military units stormed the mansion and destroyed the studio. After moving to the United Kingdom and the United States, the rebel could see his beloved Africa in the reality of world politics. Today Kuti is remembered for his remarkable musical innovation, turbulent personal life, inexhaustible desire for freedom, and pan-African beliefs.

Fela’s legacy offered the choreographer and dancers a multitude of paths to explore. Its strength, combining beauty and commitment, allows for very expressive developments, ranging from violence, extremities, and emergencies, to harmony and fragility. Musician and composer Yvan Talbot played with it, twisted and even distorted it to create a whole new musical universe for Serge Aimé Coulibaly’s production.

KALAKUTA REPUBLIK dances on a volcano, one of lost revolutions and of peoples who will ultimately rebel. The political and poetic performance becomes even more exuberant in the second half when it celebrates taking the reins in an atmosphere that is reminiscent of a discotheque – or of the end of the world. Some of the scenes are positively magical… – Philippe Noisette, Sceneweb.fr (11/03/2017)

Born in Bobo-Dioulasso, Burkina Faso, and growing up in Belgium, Serge Aimé Coulibaly has been working as a choreographer and dancer for more than 15 years. African culture is his creative generator, and also the reason behind his engagement with social causes, powerful emotions and hope. Because of the ability to give a universal message and expressiveness to modern dance, Kulibali is well accepted on several continents. In 2002, he founded Faso Danse Théâtre and has so far looked at complex themes linked to the desire to provoke positive dynamics in younger generations. He is also the founder of the ANKATA International Performing Arts Area in Bobo-Dioulasso.

At the same time, Culiballi collaborates with artists from France, Australia, India and other countries. He is an also a lecturer in leading academies of arts in Brussels and Rome. His openness to the differences in the world, his curiosity and willingness to share his accumulated experiences, shed light on his gift to create masterpieces of modern dance, sometimes even involving amateurs.

With the support of:  Musée des Confluences Lyon for the residencies, and Fédération Wallonie-Bruxelles, dance department.

Photos: ©Doune Photo and last shot is by ©Sophie Garcia