That delicate tug on the heartstrings, an all too fragile treasure, the apple of one’s eye. The child.

Dancers from different generations and a mezzo-soprano bring us back to the childhood we forgot, grew out of, or never quite understood. Fighting fears, shedding illusions, one’s first autonomous choices, the physical transformation—all of it is part of childhood as seen through a realist’s eyes.

Peeping Tom, the Belgian dance theater company, return to Plovdiv presenting an overwhelming portrait of the all-important first years which shape one’s personality. The performance is an amalgamation of behavioral models, science and personal experience to recreate the complex interior, as well as exterior, world of children on their way to adulthood.

“Kind unexpected, funny and disturbing, sometimes to the point of discomfort. It is a success.” – Luxemburger Wort

“Their talent is terrifying.” – Le Monde

KIND (CHILD) is the third part of Peeping Tom’s trilogy in which research into hidden emotions in family constellations is conducted. The trilogy started in 2014 with VADER (FATHER) and continued with MOEDER  (MOTHER) which we saw as part of ONE DANCE WEEK 2017.

Choreographers Franck Chartier and Gabriela Carrizo have managed yet again to reach deep into layers of consciousness to unsettle through world-class dance. Their art is set against live sound effects and the landmark hyper-realistic scenography. This time, viewers will find themselves in an enchanted forest, complete with looming trees and rocks. They will be exposed to both the expected and the unexpected — parents, surroundings, dreams, nightmares — leaving a stamp on a child’s development. In the end, we experience a stunning performance beyond time and space.

KIND is here to pose questions forcing us to leave our comfort zone. Is it enough to set our children on a certain path and provide explanations? How do they distinguish fact from fiction? Why do they do what they do? How do they face hardship when there is no one to lean on? Do we know them at all? Do we see the world in the same way?

Children have always had a presence in PEEPING TOM’s performances. This time, however, their perspective is the principal and ultimate drive behind the characters. Carrizo and Chartier’s point of departure were art workshops which studied the behavior of children from different backgrounds: privileged, disadvantaged, disturbed, orphaned or refugee. To accomplish that, PEEPING TOM worked with schools, homes, and shelters. Additionally, scientific research, such as the work of French neuropsychologist Boris Cyrulnik, who examined resistance in extreme situations, constitutes an important tool in the dance company’s approach. Substantive research is augmented by the team’s personal experiences and true stories, priceless moments of truth.

Peeping Tom is a Belgian dance theatre company, founded by Gabriela Carrizo (I/AR) and Franck Chartier (F). Everything at Peeping Tom starts from a hyperrealist setting. The set feels familiar, such as a retirement home in Vader, two trailer homes in 32 rue Vandenbranden or a living room in Le Salon. The creators then break open this realism and begin to defy the logic of time, space and mood. Spectators become the witness s ‐ or rather, the voyeurs ­‐ of what usually remains hidden and unsaid. They are taken into subconscious worlds and discover nightmares, fears and desires.

Peeping Tom’s dance theater builds on the transfer of experiences between artists, making it personal, dynamic and touching. Along with the expressive language of motion and stage expression, artists use cinema techniques and sound effects recorded in real time while the shows are running.

Since its foundation in 2000 in Brussels, Peeping Tom has presented its creations around the world. The company has received several important awards, including and Olivier Award in the United Kingdom for 32 rue Vandenbranden, a Patrons Circle Award at the International Arts Festival in Melbourne as well as several selections for the Belgian and Dutch Theatre Festivals. Le Salon (2005) received the French Prix du Meilleur Spectacle de Danse de l’Année 2005 and the Montblanc Young Directors Award 2007 at the Festival of Salzburg. Vader was awarded a Premio de la Critica Barcelona (Barcelona Critics Award) in the category ‘Best International Dance Production’.

Gabriela was ten years old when she started dancing at a multidisciplinary school that had, at the time, the only group of contemporary dance for children and teenagers in Cordoba, Argentina. When it became the Cordoba University Ballet, she danced with the group and created her first choreographies there.

Gabriela moved to Europe when she was nineteen, and over the years has worked with Caroline Marcadé, Les Ballets C de la B, and Needcompany, among others. She never stopped working on her own choreographies, and these years saw the production of a solo piece, E tutto sará d’ombra e di caline. She also created the choreography for the opera Wolf (2002), by Les Ballets C de la B. Gabriela created the short piece The missing door (2013) for the Nederlands Dans Theater – NDT 1 in The Hague. In 2015, Carrizo created The Land, a collaboration with the Munich Residenztheater.

Franck started dancing when he was eleven, and at the age of fifteen his mother sent him to study classical ballet at Rosella Hightower in Cannes. Between 1986 and 1989, he was a part of Maurice Béjart’s Ballet du 20ème Siècle. The following three years, he worked with Angelin Preljocaj, dancing in Le spectre de la rose at the Opéra de Paris. He moved to Brussels in 1994, to perform in Rosas’ production Kinok (1994), and he stayed on.

Franck participates in productions by Needcompany, Les Ballets C de la B, Nederlands Dans Theater. In 2013, he created 33 rue Vandenbranden for the Göteborg Opera, based on Peeping Tom’s 32 rue Vandenbranden, and he developed the choreography for the opera Marouf, Savetier du Caire by Jerôme Deschamps at the Opéra Comique de Paris.

For Nederlands Dans Theater, Franck directed The lost room in 2015, a second collaboration with the Dutch dance company after Gabriela Carrizo’s The missing door (2013). He was awarded the prestigious Dutch price ‘Swan Most Impressive Dance Production 2016’ for the piece.

With the support of the Flemish authorities

Kind was created with the support of the Tax Shelter of the Belgian Federal Government. 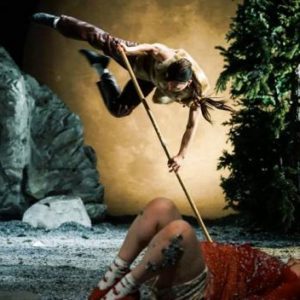 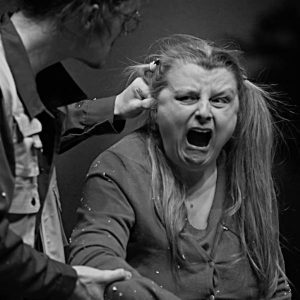