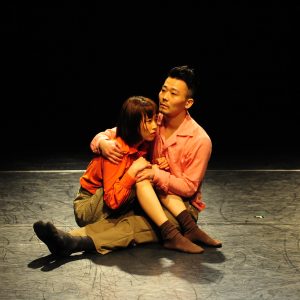 In Japanese MATOU literary means to put on, to clothe. Like the snakes and the cicadas which molt their skins, this word also sais that humans also renew their skins in evidence that they are alive. MATOU is a solo dance in which Japanese performer Ruri Mito exhibits her own unique system of movement and masterful choreography.

Ruri Mito stepped into the art of dance at the age of 5, and found a home in the halls of the Tokyo Institute of Modern Ballet. 30 years later, she is a dancer and choreographer with a number of awards from competitions in Tokyo, Seoul, Yokohama, Jerusalem, and Gdansk. Her performances have been shown at the Royal Opera of Sweden, as well as in Spain, Germany, Great Britain and Hungary, among other countries. She has collaborated with great names in modern choreography, including Sasha Valtz, Akiko Kitamura and Inbal Pinto. She is now actively performing, competing and teaching in Japan and internationally.

Photos: The first 2 images show MATOU and are by ©Bozoo

MATOU will be presented in Plovdiv with the support of Arts Council Tokyo.

What do artists try to say? What do we understand? Korean choreographer Byung-jin Lee will TRY to get right to the point with this 20-minute long performance. He attempts to overcome the distance between artists and spectators. The choreographer explores everyday life to find deviations, absurdities, shallowness… And eventually to strike a chord: Do we ever understand ourselves rally?

I believe that the dance has a transcendent value which cannot be expressed verbally. I am interested in the body and movement, and in what motivates movement. Progressive dance should be based on the movement in daily life and all that it entails. In this exploration, the dancers focus completely on their role. Everything depends on the interplay between choreographer and dancer. I want to be a dancer/choreographer who turns escapes and deviance into stories.- Byung-jin Lee

Photos: The next 2 images show TRY

Love affairs may start in flames and burn like fire. Yet sooner or later, the relationship falls into routine. Feelings fade away. A gap of loneliness widens between partners. The unexpected alienation of your beloved one is a personal drama. And a common issue for millions of people around the world, too. Can we do something when it happens to us?

Dance miniature BETWEEN by South Korean company MOMEURO MOVEMENT LAB gives an answer. The piece calls the will to win back your lover. On stage, performers and choreographers Kyum Ahn and GaYoung Lee represent an ordinary couple in a casual setting, in order for their message to come out all the brighter. Fight for your love.

MOMEURO MOVEMENT LAB research institute is a creative group based in Seul, South Korea. Their spectacles are based on the idea of heading to people. Founded in 2013, MOMEURO MOVEMENT LAB now is a rising star in Korea, performing also abroad in China, India and other counties.

Photos: The last 2 images show BETWEEN

BETWEEN is created by MOMEURO MOVEMENT LAB and will be presented in Plovdiv with the support of Arts Council Korea.

The SKIN | TRY | BETWEEN shows will be presented in Plovdiv with the support of the Seoul International Choreography Festival.