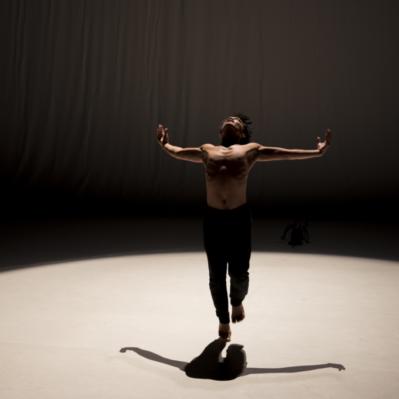 The body is a fluid space for characters, forms, and metamorphoses.

A dancer steps onstage to portray a woman, a warrior and a bird at the same time. He changes to free the body and mind from dogma. Indonesian choreographer and dancer Rianto, a rising star from Indonesia’s island of Java, creates and inhabits a space where binary opposites merge. It is a space between manhood and womanhood, between customs and religion, between conscious control and trance.

The solo performance is a centerpiece of Rianto’s creative route and virtuosic movement language. It is a plea for freedom conveyed through expressive body language as vocals and live music from exotic instruments heighten the show’s impact.

In this performance, a cultural phenomenon from the heart of Indonesia takes center stage. Lengger, a cross-gender dance form from Banyumas, Central Java, was based on a folk ritual of fertility and power. Performed mainly by men in feminine and masculine representations, the dance form is enriched with modern techniques to show the transformations we undergo and the boundaries we aim to tear apart.

Rianto, a specialist in Lengger, studies the body’s metamorphosis in different dimensions – traditional, religious, social and political. MEDIUMis a universal call for eschewing dogma and embracing the contradiction, mysteries and layered diversity that is at the heart of Javanese tradition.

“Perhaps we, like Rianto, await our own metamorphoses” – Witness. Performance

Rianto was born in a village in Banyumas, in the southwestern part of Central Java, Indonesia. Trained from young in the classical Javanese dance and East Javanese folk dance, he mastered in Lengger, a traditional cross-gender dance from Central Java based on a fertility ritual.

In 2003, Rianto moved to Tokyo where he founded the Classical Javanese dance company. He has collaborated with many dance artists. He has toured the world to much acclaim, together with renowned British choreographer Akram Khan’s company and Choy Ka Fai’s project, SoftMachine (2015). While traveling abroad, Rianto has been developing his unique dance vocabulary and style with his community’s rich heritage as a source of inspiration.

Back in Banyumas, he created MEDIUM (2016) by merging contemporary dance techniques and hypnotic Lengger movements. In MEDIUM, Rianto recalls the term Lengger as derived from elinga ngger, meaning the ‘advice to be aware, to remember’.

Vocals And Percussion: Cahwat I

MEDIUM is presented in Plovdiv with the support of The Embassy of the Republic of Indonesia in Bulgaria and the Creative Economy Agency (Bekraf) of Indonesia.