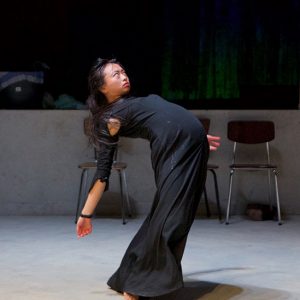 She is the beginning, transformation and brittle axis around which the family turns. She is mother.

Belgian company Peeping Tom presents the most beautiful and the most difficult role in both life and on stage. One pictorial dance exhibition which shows the various conditions and stages in the life of the mother. From the body in a coffin, to a frightened little girl, to a 40-year-old woman locked in her own cage, the play goes beyond what we think we know about the mother. Beyond the obvious into her complex inner world, where fear, madness, and dreams rule.

This is a meeting with her complex inner world where fear, madness, and dreams rule.

Intended as a confession by choreographer Gabriela Carrizo for her mother’s death, the spectacle is actually influenced by all dancers involved. Their memories build up the show’s matrix and unlock disturbing thoughts about being a woman, a parent, a mother.

The audience is brought to a number of seemingly familiar spaces – maternity ward, funeral home, recording studio, museum. But nothing is what it seems. The body turns out to be a warehouse where consciousness and unconsciousness merge, collide, and determine who we are. Unexpected connections dart out of the blurred boundaries between mourning and celebration, order and chaos, to hold on and to let go.

MOTHER (2016) is the second volume of Peeping Tom’s family trilogy that opened with FATHER (2014) and will close with CHILD.

Peeping Tom shows the circle of life in an odd but intriguing dance spectacle. – De Standaard

One must accept to lose oneself in the meanders of this choreography about the unconscious of the thread of the maternal figure … […] Aesthetics, dance, sound: everything is hypnotic in these dream paintings. – Le Soir

Moeder is an extreme performance, devastating, full of hyper-realism, of deconstruction, construction, that wants to tell a story about the mother figure, the nightmares and desires of society, of the individual, the weight that the life can have and the weight that death can have; it wants to show mothers, that are exposed as in a museum, mothers torn by indecision, mothers that are frightened from being mothers, mothers who sing (scream) up to scratch the throat, human mothers, mothers who do not have peace. – BlauBart Dance Webzine

The dance theater of Peeping Tom is very original and unique. – GB Opera

Because of the mixture of trauma and the grotesque, wit and disturbance, this is one of the most impressive performances that has been seen in this category for quite some time. – Die Rheinpfalz

For 17 years, Peeping Tom’s hallmark has been a hyper-real aesthetic anchored to a concrete set: a garden, a living room, a basement, a residential container facing snowy hill … It seems familiar, but in fact, the stage is an unstable universe questioning logic, time and space. At the heart of the groups’ productions stands human nature, with its states, pain, and joy, with its dark side, which is worth enlightening.

Peeping Tom’s Dance Theater starts with a transfer of experiences between artists, making it personal, dynamic and touching. Born with the expressive language of motion and stage expression, artists use cinema techniques and sound effects recorded in real time while the shows are running.

The Belgian company has won a number of international awards, including the Le Salon Best Dance Show in France (2005), the Mont Blanc Award for Young Directors at the Salzburg Festival (2007), the Patrons Circle Award at the International Festival Of the Arts in Melbourne and awards from other countries. Their show “32 rue Vandenbranden” won the prestigious British Olivier Award (2015) for the best dance performance and “Vader / Father” won the same category at an international competition in Barcelona.

Gabriela Carizzo and Franck Chartier have been artistic directors of Peeping Tom since they co-founded the company in 2000.

Born in Cordoba, Argentina, Gabriela Carrizo was ten years old when she began to dance at a multidisciplinary school. It had, what at the time was, the only group of contemporary dance for children and teenagers – the future Córdoba’s University Ballet. It was where Gabriela danced for a couple of years and created her first choreographies.

She moved to Europe when she was nineteen, and over the years co-operated with Caroline Marcadé, Les Ballets C de la B and Needcompany. Her first solo piece, E tutto sará d’ombra e di caline, and Bartime, was followed by various collaborations, including the opera Wolf (2002), by Les Ballets C de la B. Gabriela Carrizo directed also The missing door (2013) for the Nederlands Dans Theater – NDT 1 in The Hague and The Land (2015) for the Ensemble of Residenztheater (Munich, DE).

He began to dance when he was eleven. At the age of fifteen, his mother sent him to study classical ballet at Rosella Hightower in Cannes. Upon graduating, Franck Chartier joined Maurice Béjart’s notorious Ballet du 20ème Siècle. Three years later the show “Le spectre de la rose” came for Opéra de Paris. In 1994, Chartier’s artistic inspiration brought him back to Brussels where he settled down.

He participated in productions of various contemporary dance companies, including Les Ballets C de la B, Nederlands Dans Theater, Needcompany and more. He created the choreography for the adaptation of Henri Rabaud’s opera “Marouf, savetier du Caire” by Jérôme Deschamps and Opéra-Comique in Paris (2013).

In October 2016 Franck Chartier was awarded the prestigious Dutch price: ‘Swan Most Impressive Dance Production 2016’ for The lost room.

With the support of: Flemish authorities