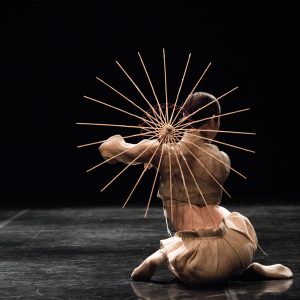 The night will include [SAL] of Kim, Jin A and A FIRST MEET of Lee, In Soo. Both shows are with a single ticket and their total duration is 60 minutes. There will be an intermission between them but guests are not encouraged to leave their seats.

A violent energy belching from others, those piercers comes around me again. The thorns sprouting from you, within you, get sharpened fiercely more and more as they protest to the world.

[SAL] is a miniature inspired by the traditional Korean dance Salp’uri. Performed and improved for many centuries, this dance is aimed at chasing demons and evil energy away and at bringing inner peace. Salp’uri is considered today as one of the most significant and remarkable forms of Korean dance.

[SAL] is performed by three Korean dancers. The piece impresses with aesthetical costumes and movements.

Kim, Jin A is a longstanding member of Cheonan City Dance Company in Cheonan, South Korea. She graduates from Dankook University with a PHD, and currently teaches classes there, as well as in the Seoul Arts College.

JuBin Company is a multi-ethnic creative group of professionals from a variety of dance backgrounds collaborating with photography and Visual communications, etc. based on the movements of Korean traditional dance.

Kim, Ju-bin was awarded the [ACT-BAD PRIZE] at the ‘ACT Festival’ in Bilbao, Spain in 2016, and is active in various international theater projects, as well as visual communication projects involving photography and video arts.