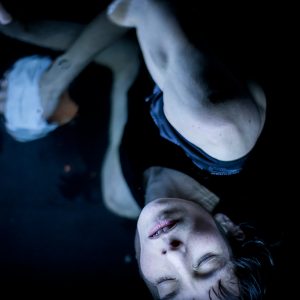 THE NARRATOR goes into the darkest layers of the intimate female world. There, where secrets, unspoken truths, fears, and disappointments are hidden. Cecil da Costa dances, sings and undergoes extreme physical strain to expose the most painful memories on the stage. Because there is no other way to free herself.

The artist is inspired by Attik Rahimi’s novel “The Stone of Patience”. The book’s protagonist is an Afghan woman who dares to talk to her husband, who is in a coma, about violence, sexual assault and oppression.

Award-winning Spitfire Company returns with a one-woman tour de force of artistic performance, drama and with a universal message.

In the show, the walls, which we ourselves built, are torn down. This dance is about the deep memories that the body cannot completely forget. It is a mirror for us to look into.

The experience one gains from The Narrator is physical in its nature. The intensity of the emotions the performer has to cope with is so strong that it allows no discussion. – Kulturissimo.cz

Harrowing…cry of fury against the random cruelty of the universe. – The Guardian

Founded in Prague, Spitfire Company is an artistic platform for physical, visual, and dance theater. It is currently one of the most progressive ensembles of author theater in the The Czech Republic. Behind their success stands the combination of originality, the introduction of different genres and new forms finding in the art of the theatre. Spitfire’s productions accentuate on the physical presence on stage, the visual impact and the disproportions in the building up of the characters.

Actor, singer, dancer, and choreographer, Cécile Da Costa graduated from the University Saint Denis, Paris XIII in Sciences of Education. The French/Portuguese artist currently lives and works in Prague as an integral part of Spitfire Company. She has been involved in much of the creative process – from choreography to actual performances on stage.

Cécile Da Costa has also worked with Farm in the Cave international theater studio (Prague, Czech Republic), on the performances SCLAVI/ the Song of an Emigrant, Waiting Room, Divadlo/The Theater, and work demonstrations, under the direction of Viliam Dočolomanský and with the choreographic guidance of Charlotta Öfverholm (DV8). Cécile is running workshops of physical theater in France and the Czech Republic.

His performances have been successfully presented on three continents and awarded many prestigious awards such as Herald Angel Award. Petr Bohac was pronounced Person of the Year in the Czech Republic at “Alternative Theater” category.

Supported by: The City of Prague, Ministry of Cuture Czech Republic